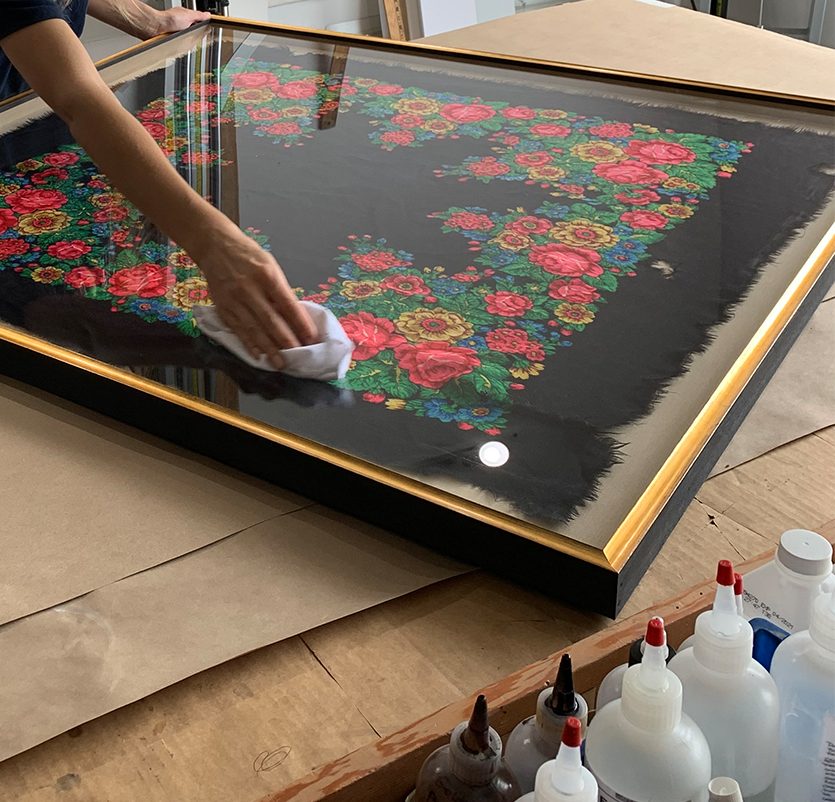 History of the Piece

This beautiful Russian shawl was brought into Trefler’s framing department with a story that spans three generations of women. Over forty years old, this scarf was made in Soviet-era Russia, in the style of Pavlovo Posad, a well known scarf manufacturer in Moscow. This style shawl, ornate with roses and decorative fringe was popularized in the late 19th and early 20th century and often worn tied around the shoulders women.

This particular shawl was worn and well loved by the grandmother of our client. A true traveling scarf, it made its way to the united states and became a treasured keepsake of its owner’s granddaughter. To commemorate three generations of women, the scarf was brought to us for a custom frame to be given as a gift to our client’s mother in Florida.

This keepsake was brought to us for both conservation and custom framing. The goal was to showcase this treasured object, while importantly protecting it from potential damage caused by age, transit and environmental factors.

When the heirloom shawl arrived at our studio, it was in an extremely fragile condition with loose threading that required immense care when handling. Our conservator carefully stitched and stabilized the textile using conservation mounting and fabric spacers which would create a shadow box effect. The final result would protect the shawl from making contact with the Plexiglass enclosure and create a weightless appearance to an otherwise weighty textile. The plexiglass used was chosen in part for its durability in transit, it after all is a traveling scarf, and also for its conservation grade, UV blocking properties. This would ensure that the bold pigments in this beautiful scarf would remain just as bright over time.

The frame selected is by Larson Juhl and features an elegant gold front with subdued black sides to highlight the detail of this very special keepsake.

Learn More about framing with us