Backwards and forwards: a brief history of the rocking chair 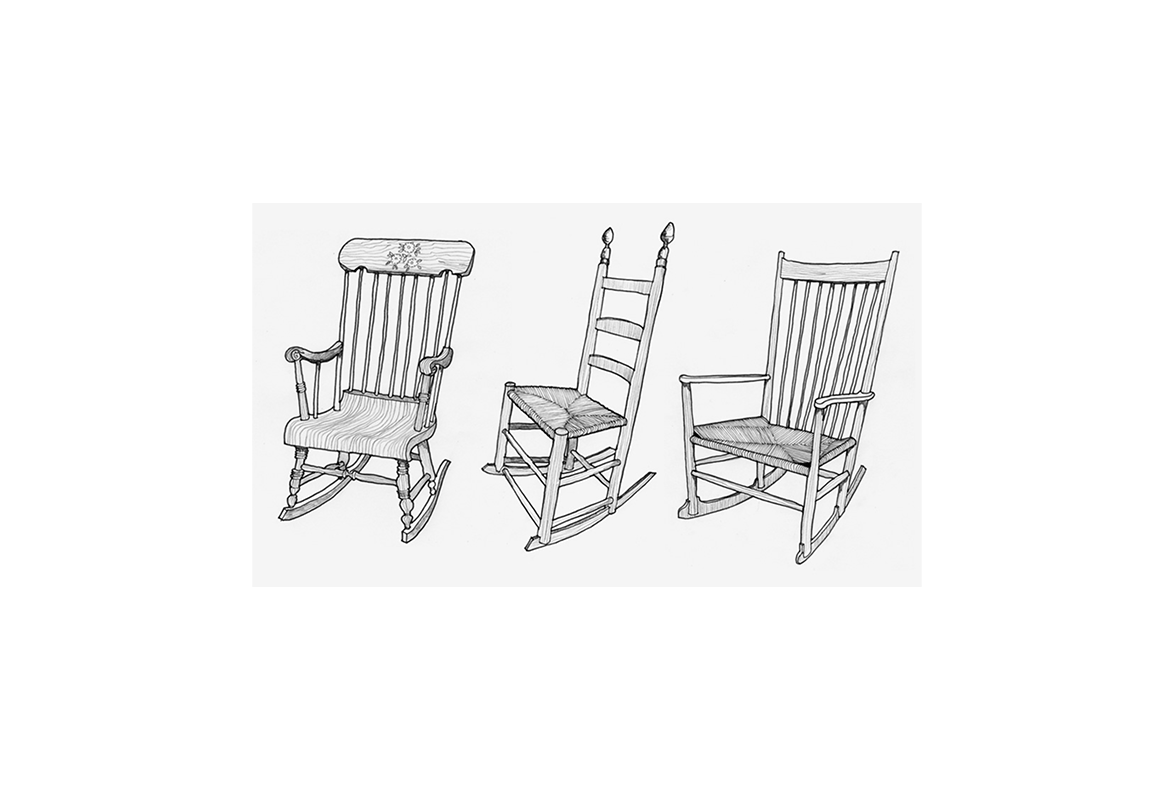 What do Pablo Picasso, John F Kennedy and Mark Twain have in common?

This isn’t a riddle, or the beginning of a joke. What is the commonality between these three prominent and yet very different public figures? It was a shared affinity for the rocking chair.

To John F Kennedy, the rocking chair was a prescriptive suggestion from his doctor, to aid in chronic back pain. In fact, during his presidency, he would come to outfit the White House with 14 rocking chairs in total. Below: A photograph taken on Oct. 6, 1961. President John F. Kennedy, left, sits in his rocker in the White House in Washington, as he talks with Soviet Foreign Minister Andrei Gromyko about the Berlin situation. His rocker of choice was a cushioned shaker style rocking chair.

The photographs below depict Picasso’s similar affection for his European version of the rocker. The portrait entitled, “Jacqueline sitting in a Rocking Chair” from 1954 is one of many an homage to his beloved chair.

The reclining and leisurely nature of the rocking chair can be seen as indicative of Twain’s larger perspective of life. He once told The New York Time’s “no sir, not a day’s work in all my life. What I have done I have done, because it has been play. If it has been work I shouldn’t have done it.”

Whatever the reason, whether to achieve physical comfort, fuel creative pursuits, or to provide a worthy seat for leisurely activities, each individual made sure that this particular type of chair had an open seat available to them wherever it was that they called home.

So who can lay claim to the invention of the rocking chair? The rocking chair has its roots in Europe. The earliest examples of rocking rails have been found in ancient Roman ruins, employed in cradles to sooth young infants. Other examples were found in Germany and England, likely later brought to America by early settlers like the Shakers, Quakers and Amish.

The first record of an American rocker can be found in a bill of sale dating from 1742, from a cabinet maker in colonial Philadelphia. Sold for just six shillings, or what would be the equivalent of 40 dollars in present day, it was described as “one Nurse chair with rockers.”

Later, in the 19th Century, this novelty of adding rocking rails to chairs saw an uptick in popularity wider than in use in merely “nursing” chairs for new mothers. It would soon become a popular furniture type for the infirm and even recreational pursuits.

On a visit to America during the 1830s, Harriet Martineau, an English writer remarked on the rising popularity of the rocking chair. “How this lazy and ungraceful indulgence ever became general, I cannot imagine, but the nation seems wedded to it.” Growing in popularity over the duration of the the 19th Century, the rocking chair was realized in various aesthetic styles, ranging from the shaker style, ladder back rocker, to the soon to be ubiquitous “Boston Rocker,” which featured a curved seat, high back and rails.

And while it was primarily a fixture of American culture during this period, European furniture manufacturers also began to take note of the growing trend. Perhaps one of the most iconic and widely produced versions to date, was Thonet’s Bentwood Rocker featured below (and the preferred style of Picasso).

The lightweight, mass-produced rocking chair was a product born from technological advances in bending wood: a technique that would be explored and adopted by other design pioneers later. Through heating wood with water vapor, Thonet achieved his Rocking Chair No. 1. Invented in 1860, this design is still a fixture in museum collections worldwide today, celebrated for its uniquely important place in the annals of design history.

And so the rocking chair; an idea born in Europe, reinvented in America and then brought back to the continent from which it came, was to become a mainstay of not only American homes, but homes  worldwide.

And although it has found itself elsewhere in the world, it still remains an icon of American sensibilities; a symbol of ingenuity and reinvention; born from a pragmatic desire to move things forward (and backward), albeit perhaps not in the most stylish manner.

“The American rocker was an inelegant marriage of convenience as far as design was concerned,“ argues Witold Rybczynski, design critic and author of “Now I Sit Me Down” an anthology of the history of chairs. “It would take the great Viennese chair maker Michael Thonet to turn the rocking chair into a work of art.“

Despite its somewhat aesthetically displeasing original design, it is a furniture type that has remained beloved for its ability to provide comfort and ease to the bodies and spirits of so many, very different sitters. “The American rocker is almost three hundred years old and still going strong,” urges Rybczynski, “everyone loves a rocker.”